AKOM Presents the Get Back Pregame Show!

Peter Jackson’s long-awaited documentary series Get Back launches on Disney Plus in just 3 days (November 25, 2021)! Join Phoebe, Daphne, and Thalia for a deeply analytical, level-headed, and definitely not hysterical countdown to this groundbreaking event in Beatledom! They discuss the Get Back book, teasers, remixes, and other advance media. Also discussed are such hard-hitting questions as “What are George’s opinions on cat food?” and “WTF is it about McBeardy, anyway?” CW: Even more swearing than usual; gratuitous d*ck jokes.

‘Pizza and Fairytales’ is John Lennon’s phrase— a brilliant one—and he conjured it to describe one man: Paul McCartney.

John in the 70’s is fairly well documented. But what about the less communicative, less examined half of Lennon/McCartney? In this episode, Phoebe and Daphne give McCartney two things he doesn’t often get: detailed lyrical analysis and recognition of his atypical self-expression. Extending this basic respect serves to shine a brighter, warmer light on the Lennon/McCartney relationship—not just in the 70s but up to present day and beyond.

Lennon and McCartney will be joined forever; they deserve to have their true story told.

Episode 4: Then We Will Know

What happened between Paul and John that forever altered their relationship and created the emotional stalemate John dubbed “Pizza and Fairytales?”

In episode Four, we evaluate four likely scenarios based on a comprehensive study of the available evidence.

Join Phoebe and Daphne on a deep exploration into the inspiration behind and meaning of Pizza and Fairytales.

1975 and 76 represent a pivotal moment for John Lennon, and his choices at this juncture determine his fate in his final years. Episode Three is a deep exploration of John’s ongoing inner conflicts: his lasting trauma over the Beatles breakup; his susceptibility to Yoko’s continuing mind games; his predilection for jealousy and insecurity.

All this, plus the long shadow cast by the nightmarish Primal Scream Therapy John underwent at the hands of Arthur Janov. It’s a topic which usually slides under the radar of Beatles discourse—until now. AKOM’s hard, probing look at Janov reveals his therapy’s catastrophic effects on John’s psyche and on the Lennon-McCartney relationship.

Ultimately, John chooses not to revive his partnership with Paul McCartney in New Orleans. How does this alter the course of their renewed relationship? And how does John’s eventual descent into depression, paranoia and superstition alter both his feelings for and perceptions of Paul?

In our second installment of Pizza & Fairytales we discuss how Yoko draws Paul into her mind games with John. Highlights of Paul’s ensuing visit to John in LA include the Toot ‘n’ Snore jam session and a peculiar Polaroid message sent to Jann Wenner.

Back in New York, John gives his last ever concert performance and the Beatles are finally, legally dissolved. Afterwards, Paul invites John to a rendezvous in New Orleans, setting the stage for a possible Lennon-McCartney reunion.

Our first episode follows John and Paul’s reconciliation in 1972-1973, John & Yoko’s decision to separate, John’s move to Los Angeles with May Pang and John’s steps toward self-acceptance.

AKOM PRESENTS: Pizza and Fairytales
A new 4-part series on Lennon & McCartney in the 1970s!

Although the Beatles are effectively broken up by 1970, Lennon and McCartney spend the next decade proving they are anything but disengaged from one other. The magnetic push and pull between these two friends keeps them orbiting each other – sometimes smoothly, sometimes not.

Despite some rocky moments, there is an enduring desire for reunion on both sides, with John and Paul each trying to feel their way toward a mutually agreeable, new kind of partnership.

They continually communicate to each other through song, just as they have since the very beginning. Their songs give voice to feelings of regret, anger, and anguish – as well as yearning, hope, reassurance, and love.

In this series, we’ve dug deep to uncover what happened between them, what happened around them, and why they were ultimately unable to reunite.

Listen to our essay and decide for yourself.

Full transcript below the cut 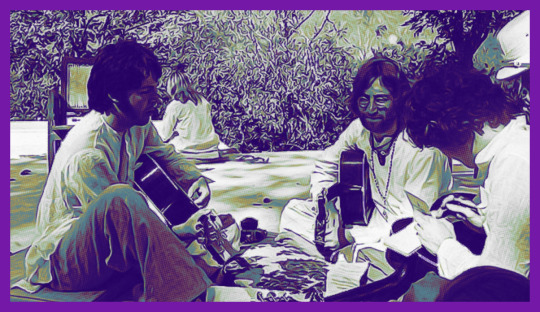 END_OF_DOCUMENT_TOKEN_TO_BE_REPLACED

In this episode, we discuss the violent incident at Paul’s 21st Birthday and John and Brian’s trip to Barcelona.

We use this as a springboard for broader topics, including: how John tends to be unfairly singled out as the only Beatle with a problematic history, the reluctance to look critically at Brian Epstein’s behavior as it pertains to the band, how homophobia curtails discussion of the fallout from the Barcelona trip and the absence of McCartney’s perspective in the reporting of this incident.

Phoebe and Thalia explore these issues, followed by a panel discussion with newest AKOM host, Iris.

Learn all about the much-maligned Magical Mystery Tour with Phoebe and Kristen.  They discuss the film’s influences, broader cinematic context and lasting cultural impact.

You won’t want to miss this in-depth look into an important but much over-looked milestone in the Beatles oeuvre! (x)

Another Kind of Mind is available on Apple Podcasts, Spotify, Google Podcasts, Podbean, and most other podcast platforms.